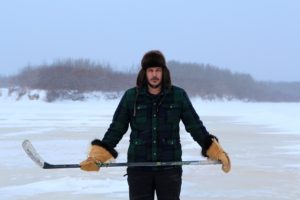 It’s become an annual tradition for hockey and music to join forces for the JUNO Cup. The ‘Rock versus Jock’ celebrity hockey game sees musical greats take on former NHL legends in a friendly on-ice match in support of MusiCounts. Adrian will be among the #Rockers skating at TD Centre this year, and he’ll be coming a long way – literally and figuratively.

Adrian resides in Attawapiskat in Northern Ontario, a First Nation community with no road access on the coast of the James Bay. Growing up in the remote region with no organized hockey leagues or formal instruction, Adrian pretty much had to teach himself to play. “For as long as I can remember, hockey has been a passion of mine,” says Sutherland. “I first started playing hockey as a boy in Attawapiskat. The school would collect donated gear from the south and we each got what we could grab.”

Adrian quickly became obsessed with learning everything he could about the good ol’ hockey game – reading every book and watching every video he could get his hands on, studying hockey plays, skating skills, mental toughness, and training and condition. He’d spend endless hours practicing alone on his backyard rink, way up in the far North, wishing for teams to play with. Over the years, Adrian progressed on his own in the sport so well that he made the cut on a Senior AA League team during a period of time when he lived in Alberta.

Now, he’s made the cut once again – this time joining forces with the Rockers for the 14th JUNO Cup. “I’m excited for the opportunity to play in the JUNO Cup, it will definitely be the highlight of my hockey career,” says Sutherland. You can read more about Adrian’s hockey journey, in his own words, in this BLOG POST.