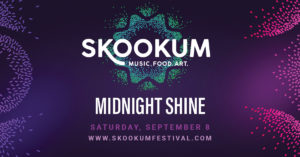 Midnight Shine, the root-rockers who have been lighting up the music world all the way from the James Bay in remote Northern Ontario, will wrap a successful touring season with a pair of highlight shows on Canada’s West Coast.

First, they’ll perform at the first-ever SKOOKUM Festival in Stanley Park, where a spirited and eclectic menu of authentic artists from the West Coast, across Canada and around the world, will take to Vancouver’s favorite urban park with diverse and intimate performances.

Then it’s on to “The Island” and their first-ever show in Nanaimo. Midnight Shine will kick-off The Port Theatre’s 2018/19 Spotlight Series, a nationally-acclaimed presentation series that showcases some of the most exciting touring artists on the scene today, and brings artistic excellence and authentic experiences to Nanaimo audiences.