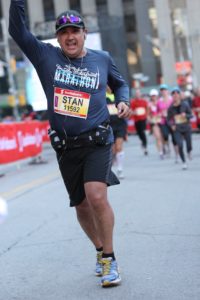 About five years ago, I decided to make some changes in the foods I was eating and the lack of the exercise in my daily life. I started to get into the habit of getting regular check ups and blood work to get an idea of where my health was. I remember that doctors over the years told me its important to do physical activity at least four times a week for half-hour stretches.

A friend was just getting into long distance running, and suggested I read a book on running and start learning how to successfully incorporate that into my life.  As I discovered, there’s much more to it than strapping on the running shoes, getting out the door, and running down the roads. You need to be aware of body parts, you need to hydrate with water, maybe electrolytes and energy gel packs.

When I first got out the door, I tell you, I couldn’t run the distance between two telephone poles without huffing and puffing! Don’t forget I had been pretty inactive for many years from high school to adult life, so running was a complete shock to my system. Even just getting out on Moose Factory streets in full view of people who could see me doing something so out of my routine was hard. I felt self-conscious, almost embarrassed to be out there running. I would see people smiling, some even making fun of me! But I persevered, kept at it every day.

I started off one telephone pole at a time, and by the end of the week, I was progressing to 4-5 telephone poles. Eventually, I felt empowered as the distances I could run increased, and people started giving me the thumbs up! My friend kept encouraging me, too, and that also kept me going. I was really feeling like I had climbed a steep, hard hill and was now at a plateau where I could run 5k, 6k and even 8k distances. Every time I hit a new distance I would thrust my fist in the air when no one was watching! It felt like a victory! At last, I could run 10k distances, three times a week.

Over the next three years I trained to complete two half marathons – one in my beloved city of Toronto, and the other in Ottawa.  Running the streets of Toronto, with no one I knew, and alongside 10,000 other runners, was intimidating. The only person there to encourage me was a lawyer friend that worked with the Moose Cree people. He yelled “Go Stan!” as I ran by him on the Lakeshore front. I’m happy to say I finished those two half marathons, and achieved an awesome personal goal!

Running is now an important part of my life. I run when I’m on business trips. I can be found most of the time on the dusty, pot-holed Moose Factory roads running for good mental and physical health, and empowering strength.

Running has helped me think about being a better bass player as well, in how I approach playing with other musicians.  My focus and attention is a lot better in trying to be in the moment during each song, just like focusing on rhythm and pace during a run and not thinking about how many more kilometers are left. Just staying in the moment and let everything else flow.

To all the kids out there, and everyone reading this blog… find something positive to build into your personal health. Remember only you can be responsible for how you treat your body. Be proactive about your health, and do it soon. Don’t waste as much time as I did. Your body will thank you for it later.