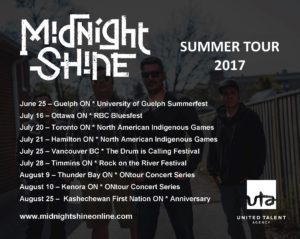 “It’s a big summer for us, and we’re happy to be heading out on tour for the first time,” says Midnight Shine’s frontman Adrian Sutherland. “We’re especially excited to be doing a show in Vancouver, our first time performing on the west coast. It’s a long way from James Bay.”

Summer will also bring new recording sessions for Midnight Shine, as they begin work on their third studio album. Watch for more info coming soon about a fall release. And in the meantime, catch Midnight Shine at one of the following shows: