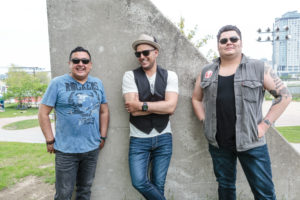 “We’re excited to finally be performing in Winnipeg,” says Midnight Shine frontman Adrian Sutherland, who hails from the isolated community of Attawapiskat in Northern Ontario.

“Our manager lives in Winnipeg, and our agent is originally from Winnipeg, so it feels like a bit of a homecoming for us. It’s also known as a great music city, so we’re looking forward to finally bringing our music to Winnipeg.”

Midnight Shine will bring their music to all of Canada at the same time, too… with APTN broadcasting live from three cities on June 23 – Winnipeg, Ottawa, Toronto – for their Indigenous Day Live concert featuring Midnight Shine along with artists like Walk Off The Earth, William Prince, Logan Staats, Kardinal Offishall, Lido Pimienta, Tom Wilson, Julian Taylor Band, and more.