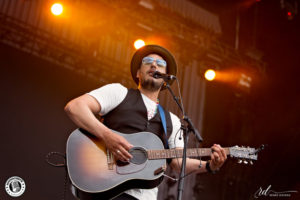 Earlier this year, our booking agent Ralph James called us with the most exciting news of our music career to date: he secured us a spot at RBC Ottawa Bluesfest. We were booked to play closing night, on the Main Stage, opening for Peter Wolf, and Tom Petty! Every upcoming artist would have done just about anything to have that spot. But it was going to be ours.

In the days leading up to Bluesfest, I felt pretty good knowing that I’d come all this way from nowhere. My home is Attawapiskat, a remote community in Northern Ontario on the coast of the James Bay. Being in Attawapiskat makes you feel far removed from the rest of the world sometimes. It can be a tough place to live, and an even tougher place from which to launch a music career.

Landing the gig at Bluesfest, I couldn’t help but think… not too bad for an Omushkego (Swampy Cree)! I felt proud, and wanted to play the best show we could, on what would be our biggest stage yet. I remember the first time playing a stage that came close to the size of the Bluesfest City Stage. There was so much space around me, I didn’t know what to do with it. The other guys in the band all seemed so far away. It was a strange feeling, being exposed in front of a crowd like that.

One great discovery though, about professional stages, is that the sound guys and stage manager are top notch. They are right on cue with everything, which helps to ease the nerves. Working with a professional crew sure beats having to fashion up a mic stand with duct tape and a yard rake – something we actually had to do once, for a show up north.

Finally, Bluesfest weekend arrived. Arriving backstage at the festival site early on Sunday afternoon was overwhelming to say the least. There were buses and semis and vehicles moving about, and all kinds of people running around doing their jobs. We felt like rookies back there, but the staff and crew were so nice to us, and treated us like an important band. On that day, in that space, I suppose we were.

They showed us to our ‘greenroom’ – a trailer in the backstage area. We noticed the sign on a trailer just a few meters away: Tom Petty & The Heartbreakers. They were going to be right there! It was hard not to want to wait around to see if we could catch a glimpse of them. But we had work to do.

Waiting backstage to do our sound-check… I couldn’t help but notice over on the side stage, a workspace full of guitars. There must have been 20 different guitars! I knew they belonged to Tom Petty, and I looked down at my only guitar – a J35 Gibson which I could barely afford to buy five years ago. I thought to myself, I wonder if I’ll be able to make it in this business and one day own that many guitars.

I would have loved to shake Tom Petty’s hand that day, and let him know how much he inspired me. When I was a kid, the jukebox in Attawapiskat had a Tom Petty song: Won’t Back Down. Any chance I got, I’d put my money in the jukebox and listen. It was a song of defiance, and gave me strength in some ways. It was also one of the first songs I taught myself to play on guitar.

We performed our best show for Bluesfest, and the organizers seemed very happy. So did the crowd, who clapped, cheered, and even shouted for an encore. We played in front of about 5000 people that day – our largest crowd yet. We had so much fun roaming around on the biggest stage we’d ever been on. I think we surprised a lot of people with our music and performance that day. We maybe even surprised ourselves a little bit. 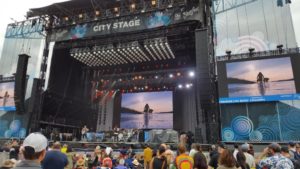 Being from the far North can have its disadvantages in more ways than one. On the flip side, it has definitely helped shape who I am today. Knowing what it feels like to have very little can set you on a path of wanting more. It creates an insatiable appetite for kushki-ho-win (success). I’ve never been one to sit around and do nothing, and anytime I have extra time, I can’t bare it.

It’s kind of funny that colonizers once set out to break the Ininiw (Indian). Yet, by attempting to do so, they unintentionally created a hybrid Canadian who excelled – and excels – in Indigenous society, as well as in western society. Ultimately, we have learned to navigate the best of both worlds, which is now very helpful. Today, even more than ever before, I am driven for kushki-ho-win.

After our show, we enjoyed a special reception put on by Bluesfest organizers, and met many Indigenous people and leaders from the Odawa region. Afterwards, we sat back with our friends and family to enjoy Tom Petty’s performance. And what a show! I haven’t seen many concerts in my life, but if I had, I’ll bet this would have been one of my favourites.

As I watched Tom Petty playing up there on that gigantic stage, I couldn’t help but notice each time he changed guitars – the same guitars I had seen backstage. While we hoped to get the chance to shake his hand that day, we never did. And now with the news of his sudden passing, it would have meant even more to us, for that moment to have happened. But now, it never will.

I’m sad to know that the world lost Tom Petty. I’m also grateful that I once got to open for one of the greatest musicians of our time. It was an experience I’ll never forget.