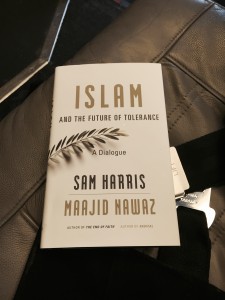 As a Cree person who is a humanist, I’m interested in earth-based spirituality and organized religion. One of the books I’m reading is a discussion between two writers who wish to demystify spirituality, reform religion, and promote human rights and democratic ideas.

Its good to have ideas about our origins, and whether there is something beyond our material world. It’s also good to look at Aboriginal traditional stories, and religious beliefs, for guidance on morality and how we should treat others.

But sometimes, people look to holy books or ancient teachings that promote bans on what women can do, how they should dress, and who they may marry. Such teachings can make good people believe in unhealthy ideas in the name of a God, Allah, Mohammed or Yahweh that are in conflict with modern, progressive ideas. Our world is also seeing much violence and death committed by extremists who believe they are doing divine work. There are problems with fundamentalist followers in any religion that are not open to criticism, free speech and reformation of dangerous ideas.

In today’s modern world, we need effective dialogue between minds of different knowledge systems that can change dangerous ideas and reform beliefs that will enhance humanity.