“Metallica?” I thought. “Isn’t that evil music?” How naive I was.

I was first introduced to Metallica by some friends in 1998, attending eighth grade at Ministik school. I was hanging with my buddy Reese one afternoon and he was showing me some of their music. “Listen to this,” as he turns up his stereo to showcase the intro to Metallica’s The Unforgiven. A horn is sounding and crescendos, you think you’re about to be kicked in the chest from some heavy-metal distortion, but instead, greeted by a mysterious nylon-string guitar, followed by a sharp sounding Stratocaster line. 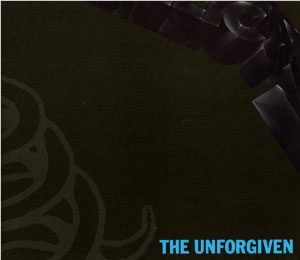 It was reminiscent of an old Spaghetti-Western film. You’d think Clint Eastwood was about to kick the door down, shoot your can of Coco-Cola, say something cool, and then leave. I never knew a heavy metal band could mix those mean riffs with pretty-ass lines. The big sound of mean, hooky-riffs tagged with a banging rhythm section and singer, James Hetfield’s barking tone. It was everything you needed in a metal band. I was hooked.

My friends and I began playing guitar in the Fall of 1999 and we all wanted to play Metallica songs. Every time someone in our little group got a new Metallica CD or live-concert VHS, I always tried to listen/watch it right away. I thought James Hetfield was the man, with his iconic white ESP Explorer-esque guitar. I think a lot of us wanted to be like him. Or maybe it was just me. 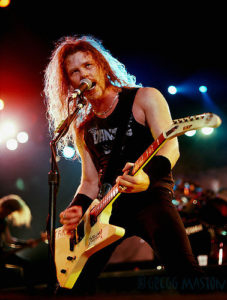 We had a little band going and eventually played a few community events here and there. Our first time playing was at the Parish Hall. We covered three Metallica songs. Our drummers’ kit didn’t have proper support to stand up, so we used to lean it on the bass amp. Halfway through the first song, during the bridge section of Enter Sandman, the drum kit fell over. Everyone in the audience was laughing, as we stopped and wondered what the hell to do. That felt like the longest ten-seconds of my life. Yet, our drummer, Stirling, managed to get his kit back up and we agreed to keep playing and finish our mini-set. I suppose if that’s the most embarrassed I’ve been on stage, I’m lucky so far.

Fast-forward to spring 2003. My cousin called and said Metallica was playing in Toronto that summer and asked if I wanted to go. I jumped at the chance! Me and a few other friends got tickets to their July 5th show in Toronto at SKYDOME Stadium. The show was called SUMMER SANITARIUM 2003 and featured Mudvayne, Deftones, Linkin Park, Limp Bizkit and Metallica as the main-headliner. 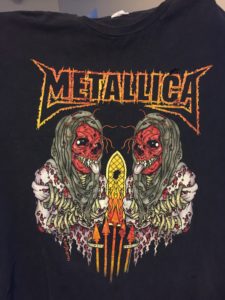 This was during a time when nu-metal was at its peak – a style of music known for it’s post-grunge and alternative influence, usually with bad-vocals and shitty guitar. Not my favourite era of music. Mudvayne was my favourite of the openers. I actually managed to make it pretty close to front-stage, but needed to take a break after 15 minutes of being up there. Body to body with tons of sweaty people. I had to buy a new shirt and change, because my original shirt was soaking in sweat from other people. Bought a water and a sub sandwich to help me get through until the main event.

At 9pm the house lights go down. The crowd erupts in excitement. This is something I’ve been wanting to witness for a long time – Metallica live! The Ennio Morricone composition Ecstasy of Gold plays over the PA, as the graveyard scene from film The Good, The Bad & The Ugly is shown on stage screens. It’s a strange feeling. I feel as though I’m the character in the film, searching for something big nearby. The song ends and the acoustic intro to Battery starts. I know some people like searching set-lists before they go to a show, but to me, that just spoils the show. It’s like reading a leaked-movie script before watching the movie. It ruins any surprise and therefore, takes away from that ecstatic electricity. 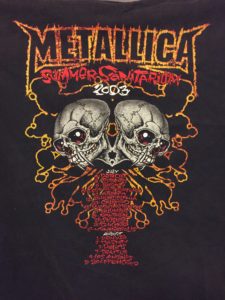 The power-chord comes to its big cadence, when the main-riff is performed. And then there he his, 50 feet in front of me, James Hatfield running through the riff with a Les Paul! Every one of the 40,000 people exploded with joy, it was almost deafening. Then comes the full band. A mosh-pit starts up right behind me. I was never one for mosh-pits, but whatever. It was loud! I could feel every kick-drum from the speakers bump my chest. Every-low bass note rumbled my guts. I was on cloud nine the whole time. They played all of their classic tunes, and showcased a couple of their latest album. The interaction with the crowd was fun. I lost my voice for the next day because I sang along to every single line to 16 songs for two hours in total.

Fast forward to spring 2017. Me and the lady purchased tickets to see Metallica in Toronto on July 16th, in the same venue as last time. I was excited enough to text my bandmates in the Shine about it…

ME: I’m going to see Metallica on July 16th!

CAPTAIN STAN: Uhh…….don’t we have a show that day? 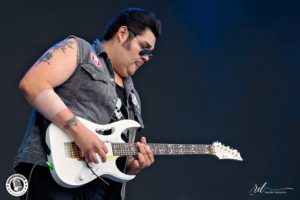 Yup. As it turns out, we were scheduled to play Ottawa Bluesfest that very same day. I was pissed-off at first, but then came to realize the Ottawa show was a true opportunity for me and the band. I sold the Metallica tickets.

Soon after, I learned we were one of the openers for Peter Wolf, and the late great Tom Petty and The Heartbreakers. I would have been a fool to pass this up! All of my life I wanted to be that guy playing music on the big stage. Maybe someday, I can be that guy who gets someone else to pick-up the guitar.  Not because they want to emulate, but because they just enjoy the music.

And if missing out on watching one big stage means playing on another big stage… how naive can I be?